N.N. Shneidman, a retired university professor living in Toronto, has written a book about the wartime Vilnius Ghetto in order, he says, to relate historic events and details that have never before been published in English.

Published by the Mosaic Press of Oakville, Ont., the new book is called The Three Tragic Heroes of the Vilnius Ghetto, and focuses on Yitzhak Witenberg, Yechiel Sheinbaum and Jacob Gens. Witenberg and Sheinbaum were leaders of opposing resistance movements, while Gens was a lead ghetto administrator who contended that co-operation with the Nazis offered the best chance of survival.

“My objective was to show that Jewish disagreements in the internal strife in the Jewish community was always hurting Jewish survival,” the author said in a recent interview. “It hurts now in Israel and it hurt during the war in Vilna.” 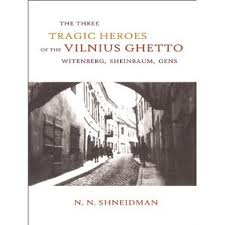 Shneidman, who lived in the Vilna Ghetto and witnessed much of its history, said he was motivated to write the book after realizing that many historians had papered over the substantial differences between Witenberg and Sheinbaum, claiming their two movements had eventually united, and had dropped the latter figure from the story.

“They were never united,” Shneidman said. “Sheinbaum’s name and his organization disappeared from history — they’re in one Hebrew book but there’s nothing about them in any of the books in English. I felt that he and his organization deserved an honourable place in the history of the Vilna Ghetto and its uprising.”

Witenberg, a communist, was leader of the United Partisans Organization (FPO), which advocated fighting the Nazis in the ghetto. “He had this idea that the proletarians in the ghetto would rise up and fight the fascists. That was a stupid illusion because the people in the ghetto didn’t want to fight the Nazis because everybody knew there was no chance of survival. They had learned that from the Warsaw Ghetto.”

Sheinbaum, a strong Zionist, was leader of a second fighting organization whose strategy was “not to fight in the ghetto but to go into the forests as soon as possible to join the partisans,” Shneidman said.

“That was the basic disagreement. My contention is that if both organizations had worked together, at least another 300 youngsters from the ghetto could have been saved in the forests.”
Shneidman did not know Sheinbaum personally but saw him fall dead during a squirmish with the Nazis on Sept. 1, 1943.

Gens, the ghetto’s third tragic figure, “believed that if the Jews worked for the Germans well and supported the German economy, it would make it possible for them to survive. But this was also an illusion. When the Germans discovered an underground organization, they decided to liquidate the ghetto step by step, and you couldn’t stop it.” The liquidation occurred on Sept. 23, 1943.

All three figures died heroically and possibly needlessly, given that each could have escaped, Shneidman said. He is scheduled to speak about his book on Sunday November 3, 1:30 p.m. in the Leah Posluns Theatre as part of the Jewish Book Fair.

He is the author of seven previous books including Jerusalem of Lithuania: The Rise and Fall of Jewish Vilnius (Mosaic Press, 1998), which includes a semi-biographical account of his experiences in the city of his birth, which was known as Vilna to the Jews.

An historical centre of Jewish learning in Eastern Europe, Vilna was supposedly dubbed “the Jerusalem of Lithuania” in the 17th century because it was home to 300 scholars who knew the Talmud by heart.

Shneidman served during the war with the partisans in the forest and later with the Soviet Army. He came to Canada in 1958 and was a professor of slavic studies at the University of Toronto for 25 years. He has also written books on Soviet education, sports and literature, including one titled Dostoevsky and Suicide. ♦