Review of: The Impossible Exile: Stefan Zweig at the End of the World, by George Prochnik (Other Press, New York)

From the Canadian Jewish News, June 2014 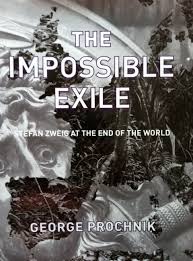 Born in Vienna in 1881, Austrian-Jewish writer Stefan Zweig was one of Europe’s most popular and most-translated writers until the Nazis forced him and countless others into exile in the 1930s. Dozens of stories, novellas, plays, essays, feuilletons as well as a novel and an autobiography poured forth from his prolific typewriter until the day he completed his last novella while residing in the town of Petropolis, Brazil. The next day, February 23, 1942, having safely mailed the typescript to his agent, he and his wife committed suicide.

While few modern readers can name any of Zweig’s works, the Germans thought them important or dangerous enough to burn, along with works by many other Jews. Fortunately, Zweig’s reputation seems to be undergoing a revival of late. At least two American presses are bringing out new translations of some of his works and a biography, Three Lives by Oliver Matuschek, was published to warm reviews in 2012. Further, film director Wes Anderson cited Zweig’s writing, particularly his autobiographical memoir The World of Yesterday, as the inspiration behind his recent popular feature film, The Grand Budapest Hotel.

Renewed interest in Zweig is also being generated by George Prochnik’s The Impossible Exile: Stefan Zweig at the End of the World, an artful and perceptive study of Zweig’s years of exile from 1935 until his fateful end.

After leaving Austria, Zweig felt he had lost his language and cultural bearings; feeling adrift and homeless, certain he would be forgotten, he fell into an irreversible spiritual decline. Unlike the many celebrated exiles who take root and flourish in the new ground into which they have been planted, he was a sad example of those who cannot rise to the enormous challenge of exile, who are “like fruit that had been ripped too soon from the tree, not ripe, but dry and bitter,” as novelist Lion Feuchtwanger once put it.

Exiled writer Thomas Mann, who spent much of the 1930s writing his masterpiece Joseph and His Brothers, building up the Jews at the exact moment the Nazis were tearing them down, regarded Zweig’s mode of demise as an act of cowardice. “He should never have granted the Nazis this triumph,” he said, “and had he had more powerful hatred and contempt for them, he would never have done it.”

Mann (who was not Jewish) and many of Zweig’s fellow Jewish exiles had long felt exasperated at Zweig’s unwillingness to condemn the Nazis. A secular Jew who equally rejected Zionism despite the persuasions of his friend Theodor Herzl, Zweig had an internationalist and humanist creed; he was a pacifist and a conciliator along the lines of a Neville Chamberlain. Unable to imagine an uneducated “beer-hall agitator” as anything but a temporary threat, he preached understanding and urged his fellow emigres not to criticize the newly-fashioned Reich for fear of provoking it to further outrages.

Zweig’s pacifism was apparent in an early antiwar drama written after WWI, based on the life of the Biblical prophet Jeremiah, in which Jeremiah urges the Jews of ancient Jerusalem to make peace with the besieging Chaldeans. It was an idea already made topical in British playwright Israel Zangwill’s 1908 play The Melting Pot, in which Jewish-American immigrants who have survived a bloody pogrom are urged to forgive the perpetrators — to “turn the other cheek,” so to speak — for the sake of future generations. 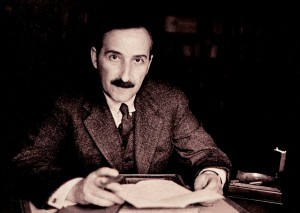 No matter his subject, Zweig always put a great deal of his philosophical outlook into his work, almost as if he was looking into a mirror at his own soul. He wrote several full-length biographies in the 1930s of historical figures facing great peril, such as Marie Antoinette, Mary Queen of Scots and Erasmus, often projecting aspects of his own situation onto theirs. Zweig, like Marie Antoinette, was born into wealth (his father was an industrialist) and he seemed to identify with an aristocrat being forced into exile and then death. Zweig’s Erasmus was a humanist and internationalist battling the proto-fascist Martin Luther; its author freely admitted the book was “a thinly-veiled self portrait.”

Apparently Zweig wasn’t interested in a self-portrait that wasn’t veiled to some degree. In his autobiography The World of Yesterday, which he completed in Ossining, New York in 1941, he barely mentions his two wives. The book is a painting of the era in which he lived, subdivided into the three distinct phases of his life: before the First World War, between the wars, and after Hitler’s rise. In a review of the book, Hanna Arendt noted that “not one of his reactions during all this period was the result of political convictions.”

For a time Zweig lived in a house in the mountains above Salzburg, a place often swarming with writers and artists. He and his wife and friends spent many “heart-warming hours there,” he later mused, “looking out from the terrace over the beautiful and peaceful landscape, without suspecting that exactly opposite, on the mountain of Berchtesgaden, a man sat who would one day destroy it all.”

Zweig’s exile began in 1934, the day the police knocked on his door, demanding to search his home for weapons. He quickly left for London and stayed there until England declared war on Germany and branded him an “enemy alien.” Then his peripatetic trail led him to New York, Ossining and Brazil.

Zweig wrote studies of many popular writers from Dickens to Dostoyevsky, Balzac to Baudelaire, focusing always on the subtle portrayal of character. He excelled in cleverly abbreviated narrative pacing and was adept in what Elmore Leonard once called the art of “leaving out the parts that readers don’t want to read.” His favoured form was the novella, which seemed to facilitate a sort of splashy sensationalism that may have led some critics to dismiss his work as “railway carriage reading.”

His novella Chess Story, completed the day before his suicide, is regarded as one of his best. The story focuses on a group of men playing chess against a chess master on board an ocean liner bound for South America. A stranger proves a superlative challenger and reveals he had taught himself to play chess with (or against) himself, splitting his mind down the middle, while in solitary confinement; the story is a portrait of mental disintegration. His one novel, Beware of Pity (1938) was a dark psychological novel of manners set in the Habsburg Empire on the verge of its collapse.

Near the end, Zweig felt he had lost not only his language but also his hard-earned place in the world of letters. Disillusioned and bitter, he was certain that the Nazis had won and that he and other writers of his period had been relegated to the proverbial dustbin of history. Prochnik’s fine and evocative book is bound to rekindle interest in Zweig’s neglected ouevre. ♦