Torontonians who have vanished to the four corners of the globe 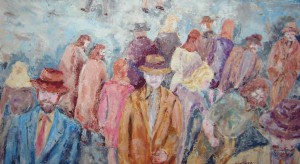 In nearly every large city and town across the face of the earth are groups of men and women who, by all the laws of preference, should be spending their lives hundreds or thousands of miles from where they are.

Somewhere, at some time, the law of their native city or country demanded that an account be squared, and instant flight appeared to be the only avenue of personal safety.

There are fugitives in Toronto, resident here for many years, moving in pleasant social circles, who dare not set foot in New York, Philadelphia, or whatever the city or state may be. Possibly several scores of men and women now in New York or Chicago dare not turn their faces toward Toronto.

I have met successful citizens in the West who prefer to avoid the East, and vice versa. Mexico contains an unnumbered fraternity of ex-Canadians, drawn there not by commercial chances, but through the likelihood of oblivion in a disorganized republic. I have seen former Canadians, marked in the bad books of their city or country, eking out a living as boatmen on the Mississippi.

Once in a while a local newspaper comes to their hands, but the sight of their native town is something that only a dozen years may possibly render safe.

The civic police department, of course, keeps track of all those cases of sudden disappearance connected with “jumping” the bail bonds, and all instances in which the miscreant was already under warrant of arrest. These, however, are merely the fringe of the procession of legal offenders whose absence from the city is either the cause of a police hullabaloo, or of silent grieving with the circle of a family.

There are no statistics on the matter, but a count of known fugitives from Toronto during the past five years easily demonstrates the possibility of a roll-call of a thousand missing.

The writer has knowledge of a particularly vivid illustration of the pathetic circumstances surrounding some of these stories of vanished men and women. A wholesale grocer in an Ontario town failed some years ago, and, being unable to give a satisfactory explanation to his creditors, disappeared across the United States border. Later he drifted to California and one night, during a gambling house fracas, struck a comrade with a bowie knife.

With a warrant for his arrest telegraphed all over the country, he made short tracks for Mexico, and there in the capital city started a financial corporation which attained great proportions in a few years. His old loose methods gradually redominated him. One unfortunate speculation followed another. Presently the corporation toppled, and the fugitive Canadian went to the federal penitentiary for five years, where he lies today, trusting to the fortunes of civil war to bring about his release.

Alexander Powell, the noted traveler, tells somewhere of meeting in all corners of the world, in the islands of the ocean, and the ports of heathen continents, exiled Americans whose “hankering” for home was one of the most pitiful experiences a man could ever meet. So many crimes in recent years have had to accept the satisfaction of an entreated bail bond and a vanished prisoner that the total of the exiles from Canadian courts living now in the United States or Europe runs into incredible figures.
Doctors charged with performing illegal operations, officers of financial corporations false to their trust, fraudulent stock jobbers, and the various body of “accidental” and malevolent criminals — all are represented in the Toronto Police Department’s list of the vanished.

“By far the greater number whose whereabouts we are asked to find are wife deserters,” observed Inspector of Detectives George Kennedy to The Star Weekly, “and wife deserters cannot be brought across the border under the present law.”

“Where are Dr. Hawks, Dr. Cook, and all the others who have jumped their bail?”

“Once in a while we get trace of them, but the information is not positive.”

“How long does the search continue?”

“Until the day they are arrested or reported dead.”

“There is no period beyond which their offence becomes outlawed?

In other words, should an exile return in t8140 he is liable to be tried and convicted on the evidence from which he flees today. A few cases of such a sort are on record.

In Paris, France, there is said to be a colony of Canadians whose motives for expatriation are far from normal or complimentary. So to a lesser degree in Berlin and London. Once in a while a returned globe trotter reports a meeting with a once prominent Canadian in some queer quarter of the hemispheres for whose return the police have diligently sought.

Not long ago the writer met a tourist just arrived from the Mediterranean. He had spent a day or two in Tunis.

“Running the commissariat department for the local army. Yes, sir, he gets what equals five hundred pounds sterling a year. You couldn’t get that boy back to Toronto with a pair of battleships. Although” — he hesitated as if apologizing for the exaggeration — “I have heard him talk of the old days when he drilled with the Queen’s Own, and he didn’t like to laugh over it, either.” ♦