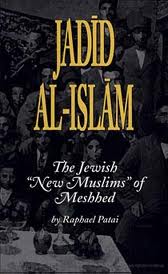 In 1839 an unfounded rumor spread among the Shi’ite Muslims of the town of Meshed in northeastern Iran that a Jewish woman had committed an act of disrespect towards Islam.

According to a period account preserved in the Central Zionist Archives in Jerusalem, an angry mob “attacked the Jewish quarter, broke into the Jewish houses, and robbed and looted everything they could lay their hands on. They beat the Jews cruelly, killed 36 Jewish men, and abducted many beautiful Jewish maidens taking them into the houses of Muslims.”

Following this traumatic pogrom, the roughly 400 Jewish families in Meshed were forced to convert to Islam, an event that became known locally as the Allahdad. The word means “God’s gift” in Arabic, but the Jews interpreted it as “God’s punishment.” Thereafter, they were known as the Jadid al-Islam or “new Muslims.”

Outwardly, the Jews of Meshed practised Islam — they prayed in mosques, performed wedding ceremonies and buried their dead in accordance with Muslim rituals, even made the required pilgrimages to Mecca and Medina. Inwardly, however, they remained Jewish. As Raphael Patai writes in his well-researched 1997 book, Jadid Al-Islam: The Jewish “New Muslims” of Meshhed (Wayne State University) nothing could have prevented them “from reciting the Jewish prayers in the privacy of their homes and maintaining the consciousness of being Jews and not Muslims.”

The Jadidim kept a separate cemetery, fasted in secret on Yom Kippur, and kept up many Jewish rituals away from the prying eyes of their Shi’ite neighbours. These crypto-Jews of Meshed thus maintained a complex dual life filled with a parallel assortment of difficulties and perils that the Conversos must have faced in Inquisition-era Spain.

Scholars Gotthard Deutsch and Elkan N. Adler, writing in the Jewish Encyclopedia about a century ago, numbered the colony of secret Jews in Meshed at about 2,000 and noted they had been forcibly converted in the previous century under the cruel reign of “Shah Nur al-Din’s father.” They also noted that some had migrated to “transcaspian territory” and were practising Judaism in Merv, Ashcabad, Bokhara and Samarcand.

It was another 40 years before Patai began his research by conducting extensive interviews with elders of the Meshhed Jadidim community who had arrived in Jerusalem. He wrote some articles at the time, then let his knowledge grow and mature for half a century. His book on the Meshed Jews was one of the prolific scholar’s last. He died in 1996 at the age of 85, leaving this significant work to be published posthumously.

Through a masterful examination of many sources, the book traces the history of Jewish life in Meshhed before, during and after the Allahdad. One chapter describes the “decade of blood libels” that began in 1892; another focuses on the lure of early Zionism which brought many members of the endangered community to Erez Israel; yet another is devoted to the many folktales and legends that sprang up among this singular Jewish subtribe. Patai also discusses birth customs, Jewish names and origins, Hebrew education, marriage and burial customs, and provides a glossary of Judeo-Persian vocabulary.

The book offers a fascinating account of a little-known branch of the Jewish family tree whose roots date back 2,500 years to ancient Persia at the time of the first exile. ♦