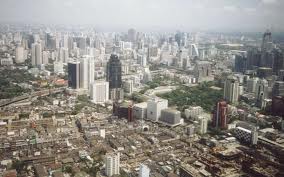 Sam Cohen, a petroleum geologist from Calgary, left Canada to work on a large oil field in the Gulf of Thailand about 1983.

When his contract expired during an industry slowdown several years later, he chose to remain in the bustling capital city of Bangkok, where a forest of cranes along the skyline suggests an astonishing rate of growth.

Now 66, divorced with several grown children in Canada, Cohen has done well as an independent oil-industry consultant and advisor to the Alberta government’s Ministry of Economic Development and Trade.

“It’s very exciting here,” he says. “Things are really booming and terrifically busy. Whereas you go back to Canada and it’s sad, stores are closing and there are bankruptcy sales everywhere.”

Bangkok, a sprawling, congested metropolis of 10 million, has a small Jewish community of no more than 40 families, or some 150 to 170 individuals. Many are transients, colored-stone dealers lured by the city’s growing importance internationally as a gem and diamond-cutting center. There are numerous Iraqi Jews here, some Israelis associated with the Israeli embassy, and a handful of British and North American Jews, many of whom are gem dealers, real estate developers or petroleum-industry engineers like Sam Cohen.

“As few Jews as there are here, there are two congregations,” Cohen notes. “Isn’t that typically Jewish?”

Although neither congregation has held a rabbi for several years, services are held daily in the Iraqi synagogue and somewhat less regularly in the Ashkenazi shul.

Each Pesach, a large community seder at the President Meridien Hotel attracts many visitors as well as permanent Jewish residents. The city also has a Jewish Community Center where visitors may stay and eat kosher in a country that thrives on shrimp, pork and fish dishes smothered in oyster sauce.

“Many Jews contact us when they pass through,” says Margaret Cane, an active member of the community association who arrived here seven years ago from the Mill Hill section of London, England.

“Many Orthodox Jews won’t eat anywhere else, so they stay with us. We never turn anybody away.”

“It’s an exciting place to live,” says Ruth Gerson. “There’s so much happening, and you get to meet people from all over the world.” Ruth’s husband is Michael Gerson, a 50-year-old Bangkok-born civil engineer and the current head of the community association. His parents were among the first Jews to settle here after they arrived from Russia around 1920.

“There may have been a few Jewish families here back in the last century, but none of their descendants remained,” he says. “When my parents established themselves here, there was just a handful of Jewish families. We’re the oldest Jewish family in Bangkok.”

A more recent arrival is Uzi Manor, Israel’s ambassador to Thailand, who arrived just 18 months ago after serving in a similar capacity in Sri Lanka and South Korea.

Israel has no official diplomatic relations with Viet Nam, Cambodia or Laos but “we do hope to have them in the near future,” says Manor. “We’ve had a full ambassador in Thailand for more than 35 years. The relations between our two countries have always been good.”

Manor also expresses hope that commercial relations between Israel and Thailand, which he estimates at only $150 million per annum, will increase. Chemicals, canned food, gems and irrigation equipment and machinery are among the items Israel currently exports to Thailand.

Manor says he likes Bangkok very much. “The city is developing rapidly. You can see the change every day. Most of the high buildings you see here are new. Almost every building over five stories is less than five years old.”

Born to Jewish parents in Nova Scotia some 40 years ago, Dr. Jeff Chernin is a medical officer with Health and Welfare Canada, stationed with the Canadian Embassy in Bangkok. His job takes him to Vietnam, Bangladesh and Burma, where he provides medical care to Canadian government officials. He’s been in Asia for the past nine years.

Bangkok’s heavy pollution is directly linked to its notorious traffic problems, Chernin observes. “The city just doesn’t have the infrastructure to cope with the automobile age. Wherever you are at 4.30 in the afternoon you stay until 6, unless you want to spend the time sitting in a taxi or tuk-tuk.”

The traffic situation, however, pales in comparison to the country’s current political problems. Untold hundreds were killed during a military crackdown at a peaceful demonstration at the city’s Democracy Monument in May. But Chernin puts a light face on the disturbance. “Only one foreigner was injured,” he notes. “One is not, on a day-to-day basis, affected by the political situation.”

Sam Cohen’s reaction to the bloodshed seems similarly muted. “The army overreacted and killed some people, and there has been some consternation. But it barely slowed things down. The economy slowed a bit but it’s coming right back.”

If all goes well, elections scheduled for mid-September may restore popular faith in the country’s parliamentary-style democracy in which many feel the military retains far too much power. However, the popularity of the Thais royal family remains unabated. Despite the fresh political turmoil, Thais celebrated Queen Sirikit’s 60th birthday with much color and pageantry throughout the month of August. ♦