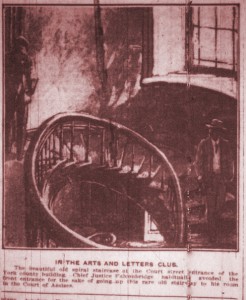 Less than a year ago a well-known artist in Toronto, whose name is W. E. H. Macdonald, drew a simple picture of a Viking ship with full sails set at sunrise, over a rollicking sea. he intended it to have a particular meaning. The picture has since reappeared a few thousand times on certain letterheads and envelopes sent out by the Arts and Letters Club of Toronto.

The artist probably intended to convey the idea that his particular club then in the dawn of its existence, had a membership of men who, in their own special way, intended to make great progress throughout the time the Arts and Letters Club was without a home, and just beginning to wrestle with the problem of how to get one.

Who the Members Are.

If you should have asked him why he had such faith in so unusual a club he might have replied that he had considerable faith in a large number of the men who are its members. Were he to speak of his own craft of painters and graphic artists who form about twenty per cent of the members, he might mention such well-known men as E. Wylygrier, portrait painter and president of the club; C. W. Jefferys, the eminent pen and ink man, painter and once secretary of the club; George A. Reid, known to Canadians for twenty-five years as a strong painter, and now a member of the club executive; J. W. Beatty, who does big things all his own way; Curtis Williamson, one of the strongest painters in Canada; Edmund Morris, an equally well known member of the Canadian Art Club; besides Robert Holmes, who paints wild flowers better than any other man in Canada; Gustav Hahn, who does more high-class mural decorations than any other man in Toronto; Fred Challener, premier fresco maker and one of the strongest colorists in Canada; Fred Brigden, equally known as a colorist; F. M. Bell-Smith, one of the deans of Canadian art; C. M. Manly, R. F. Gagen, and a whole crowd of young men beginning to make their mark in the world of paint, pen and pencil.

But painters alone do not make a club such as the Arts and Letters, and when you come to music the first member of this club that strikes the attention is Dr. A. S. Vogt, conductor of the famous Mendelssohn Choir, and the first man to send a check for membership fee in the club. There is Frank Weisman, conductor of the Toronto Symphony Orchestra, . . . Frank Blanchard, concert master of the Symphony Orchestra; besides the other members of his well-known string quartet; Francis Coombs, organist of St. Alban’s Cahedral; J. G. Gallowy and T. H. Kilimaster, both young English organists; Richard Tattersail, Scotch organist and leader of the Brahms Trio; W. E. Fairclough, organists of All Saints; Edmund Hardy of the Parkdale Presbyterian Church; and A. T. Cringan, vocal teacher. 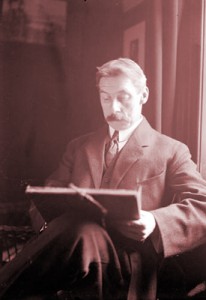 Still another list would include nearly all the leading writers, and most of the prominent editors in Toronto, besides such literary characters as T. Arnold Haultain, lately private secretary to Goldwin Smith; Dr. Felham Edgar, professor of literature; Chas. T. Currelly, archaeologist; E. J. Kylie, professor of history; Geo. H. Locke, chief public librarian; A. E. McFarlane, short story writer for American magazines; Peter McArthur, once editor of Truth in New York, now the publisher of a new magazine called Ourselves, to appear within two weeks; and a score of others.

Then you would come to the architects, of whom there are more than twenty in the Arts and Letters Club, including nearly all the leading men in their profession: and they form one of the strongest groups in the club. From that it would be easy to mention the sculptors, of whom Walter Allward is one of the most enthusiastic members of the new club, and easily one of the most eminent art workers in America; Emmanuel Hahn, his associate, and T. Lisney Banks.

The rest of this cosmopolitan club is composed of men, most of whom do not work at any of the arts for a living, but take a keen practical interest in one or more of the arts. ♦