Toronto Jews showed their support for Britain and the Allies against the forces of “Prussianism” in the First World War. The popular author Solomon Asch (here spelled Ash) spoke at this rally in Massey Hall in 1915. This article appeared under the title “Great Jewish Host Prays For the Allies” and the subtitle “Unique Sunday Gathering in Massey Hall — Russian Author Speaks — Plea for Justice to Polish Jews.” 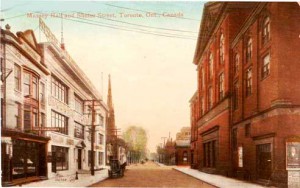 A great host of Israelites assembled in Massey Hall yesterday afternoon to pray for the cause of the allies, and especially to remember the half-million Jews who are fighting against Prussianism in Europe. Never before in Canada has there been such a gathering of Hebrew people brought together to consider the fortunes of war. The hall was packed and the scene might have occurred in old Palestine, save for the costumes, when the tribes of Israel met to consider the aggression of the Philistines.

Mr. Paul Levi presided, and said they had met to pray for the fallen soldiers of the allies and for their coreligionists, nearly half a million of whom were fighting against the system of militarism in Europe.

Prays for Britain’s Cause.

Rabbi Price of the University Avenue Synagogue in a brief prayer in English invoked the blessing of Almighty God upon the cause of Britain. “We remember this day the fallen in the light. Shelter their souls in the shadow of Thy wings, that the memory of their heroism may not perish from the earth. We lament this sore evil that has befallen the civilized world, and we pray that the suffering may hasten the time when war shall be no more.” The prayer was uttered in a deep, earnest voice, and might have been delivered by a Christian minister. 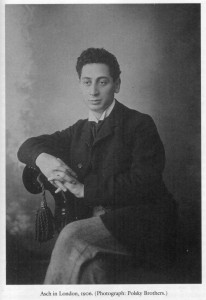 The chief speaker of the occasion was the Russian author and poet, Mr. Solomon Ash, who recently arrived from the scene of war in Poland. Mr. Ash is a tall, handsome, cultured Polish Jew, and he spoke in Yiddish. His leisurely and earnest oratory moved the audience to enthusiasm and sometimes to tears. He spoke of the state of things prevailing in Poland as a result of the war. In gentle tones and spreading his arms downward he told of the “kleina kinder” (little children) running about the streets of Russia with no fathers to care for them. He pleaded with the audience to make sacrifices to help the suffering widows and children of Poland.

Rabbi Minikin of Hamilton spoke of the duty of the Jewish people in the present struggle, and expressed the hope that Britain would use her great influence for the emancipation of the Jews in Russia when the war was over.

Among the other speakers was Mr. Jacob Barondess of the Board of Education of New York. Cantor Wladowsky conducted the musical program. ♦