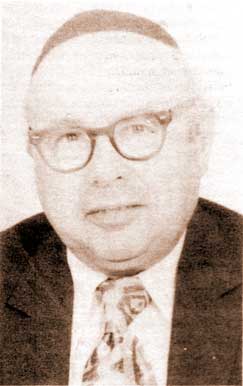 Shemen’s latest contribution to Jewish scholarship includes interpretations on Biblical, Talmudic, rabbinic and literary studies. The two volumes, published in Tel Aviv In Yiddish, discuss issues that date back to creation and the Book of Genesis, up to such current day controversial issues as conversion and assimilation.

The rabbinic scholar was born in Chodel, Poland, a small town near Lublin, just before the outbreak of the First World War. His great-grandfather was a disciple of the founder of Chassidism in Poland, the “Seer of Lublin.” Both his parents were descendants of chassidism and scholars.

When he was just over 17 years old, he received rabbinic ordination from the chief rabbi of Warsaw, Rabbi Eliezer Ezra Kershenbaum of Lublin and also from the famous scholar Rabbi Pinchas Eliezer Grosfershtand.

In 1930, he came to Canada with his family and became a disciple of the world respected rabbinic authority and author, Rabbi Yehuda Leib Graubart. In 1936, he married Toby (Rosenberg) and they have four children.

Among his numerous books are: Fascism in Europe; Jewish Attitude Toward the Non-Jew; Lublin, a best seller in Yiddish literature which received an award from the Canadian Jewish Congress; Jewish Attitudes Toward Labour, which received the Zvi Cassel award in Mexico; The Role of the Woman in Jewish Life; Literature and Lore, for which he was awarded the J. J. Segal Award in Montreal; and Sanctity of Jewish Family Life.

For over 40 years, Shemen has served as director of the Kashruth Council and Rabbinical Vaad Hakashruth of the Canadian Jewish Congress and the Toronto Jewish Congress. He is one of the founders of Congregation Torah V’Avoda and he is associated with the Eitz Chaim Schools where he taught for over 25 years.

In Jewish Attitudes Towards Man, the openlng chapter deals with the question, “What does it mean, G-d created man in his image?” With scholarly interpretations, the rabbi discusses Maimonides’ explanation of creation and man’s intellectual elevation to the utmost heights to control even the universe. He continues with the interpretations of other Jewish philosophers’ writings on man’s relationship to man and other creations.

The author moves chronologically to Abraham to discuss, “Why the seed (descendants) of Abraham were considered superior to others.” Shemen elaborates that this is not a chauvinistic or racial distinction, but is based on moral and ethical elevation.

He moves thematically from universalism versus isolationism within Judaism to the fight against the worship of idols, protection from assimilation, and cults and heathen practices among the sects at the time of the Second Temple.

The rabbi writes extensively about the struggle by the Sages against the Romans who wanted to destroy the Jewish religion and nation. At the same time, they struggled to fight off other cultures which infiltrated Judaism while also observing the commandment to teach non-Jews the seven commandments they should follow.

One chapter of his analytical book deals with the translation of the Bible throughout the ages. He compares the translations from Hebrew to Aramaic, Greek, Latin and other languages by referring to Onkelos as the disciple of the Sages.

From ancient writings, Rabbi Shemen moves through to modem times with a chapter on the 18th century enlightenment period which began in Germany and spread to Eastern Europe. He discusses the Orthodox movement’s resistance to it.

Among the numerous topics he addresses are modern-day concerns such as conversion, and the acceptance, recognition and appreciation of righteous peoples regardless of their Jewish or non-Jewish backgrounds.

He explores and expands on Talmudic thoughts on Jesus and his apostles and why Jews did not accept Jesus. He explains the ramification of this rejection within Christian and Jewish circles to the present time. ♦

This article first appeared in the Canadian Jewish News and appears here courtesy of the author. © 1989 by Cynthia Gasner.

A founder of COR, the kashruth supervisory body, Rabbi Shemen was well respected by people from all walks of life, and always sought to bridge the divides between the Reform, Conservative and Orthodox communities within the Jewish world, his eulogists  said.

Rabbi Shemen received smicha from the Lubliner rav and made COR one of the largest and most respected kosher organizations in North America. He was a longtime contributor to Yiddish newspapers who wrote many articles, sometimes using the pseudonym “A Reporter,” on Jewish issues and about the early Jewish community of Toronto.