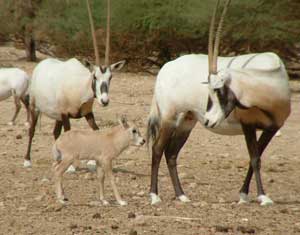 A recently opened camping compound on an Israeli wildlife preserve allows overnight guests to observe coyotes, jackals and other nocturnal animals in action.

But you don’t have to sleep over at the Yotvata Hai-Bar Nature Reserve to see these nightly creatures. Daytime visitors may also view a menagerie of rodents, reptiles and arthropods in the Desert Night Life Exhibition Hall, which simulates nighttime conditions during the day.

Hai-Bar — the name is Hebrew for “wildlife” — is an 8000-acre region of salt flats and accacia trees in the Negev desert about 35 km north of Eilat, near the ancient settlement of Yotvata. Despite the many animals on view, staff emphasize that is not a zoo but rather a wildlife rehabilitation and research facility.

Founded in 1964 and later taken over by the Nature Reserves Authority, Yotvata Hai-Bar’s chief mission is to establish reproduction groups of wild animals that are endangered or have disappeared from the landscape. A special focus is given to species mentioned in the Bible such as the African wild ass, a precursor to the modern donkey, mentioned in the Book of Job.

The facility also aims to educate the public about the desert’s delicate habitat.

Motorized tours roll along a penned range in which herds of herbivorous animals live in conditions similar to those in the wild.

Ostriches and onagers roam and gather at feeding stations. Timid gray African asses gallop away from the fence, kicking up clouds of dust as visitors approach. Even shyer is the small dorcas gazelle, usually glimpsed at a distance and reminiscent of the gazelles mentioned in the Biblical Song of Songs. 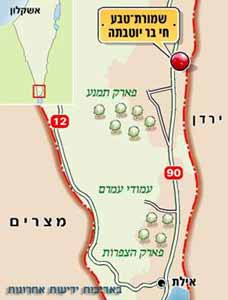 “Watching the animals cavorting in their natural habitat, with the hills of Jordan in the distance, it takes just a bit of imagination and a touch of belief to fancy yourself back in the time of Abraham,” one observer noted.

Visitors are invited to hike along marked paths but are asked to give the animals the right of way. “The reserve has its own world of sounds,” a sign advises. “Please be quiet and listen to the voices of nature around you.”

The ostrich, onager and other species were eradicated from the region about a century ago by the first wave of hunters with automatic weapons. Local populations of wolves, vultures and other predators and carrion-eating birds also fell dramatically.

The onager, an untamable Asiatic wild ass, is the reserve’s first success story. Wild onagers were reintroduced into the region in the 1980s. Today the animal may be seen congregating around several water sources in summer and over a wider range in winter.

The Arabian oryx, which resembles an antelope with a long spiral horn, has also been reintroduced to the area near Ein Shahak. The herd is marked and tracked by both radio and satellite.

Ostrichs have not yet been reintroduced into the wild. It’s not known how they would react to human encroachments onto the desert landscape and various local agricultural endeavours.

Located some distance from the mammals, the Predators Center is home to various exotic canines, felines and hyenas, including Israel’s largest canine, the wolf (Canis lupus) and the small sand cat (Felix margarita) which lives in sand dunes.

Larger cats include the leopard and the caracal, identified by its tufted ears. The Predators Center also houses various caged birds of prey and vultures.

Visitors are given the opportunity to feed the carnivores and learn about mating rituals. Tigers and jackals look on as guests gather around moonlit campfires after dark.

Yotvata Hai Bar is also a halfway-house for endangered species from other regions such as the scimitar horned oryx and the addax. Both of these antelope-like beasts are native to the Sahara region and there are no plans to introduce them in Israel. The reserve is raising reproduction groups of oryx as part of an international campaign to save it from extinction.

Yotvata Hai Bar Nature Reserve is on Route 90, between Kibbutz Yotvata and Kibbutz Samar. Admission, including the Predator Center, is NIS 39 for adults, NIS 18 for children. Most visits average two to three hours.