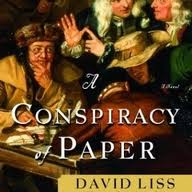 Ever since Poe, the detective has figured as a major archetypal hero in modern fiction. Literary detectives have emerged in so many personas and guises that there are now more than a minyan’s worth of Jewish gumshoes in the bookshops, ranging from Howard Engel’s Benny Cooperman to Harry Kemerman’s Rabbi David Small. (An internet search turns up several of the female variety as well.)

David Liss, author of the recently published A Spectacle of Corruption, offers us a memorable Jewish proto-detective in the character of Benjamin Weaver, a Sephardic Jew who acts as a roguish sleuth in the roughshod London society of the 1720s. A former boxer, Weaver becomes a self-employed “thief-taker,” the nearest thing the crime-ridden city had to a municipal policeman.

A Spectacle of Corruption is a sequel to A Conspiracy of Paper, Liss’s bestselling 2000 literary debut novel in which Weaver was introduced. The first book deals with the origins of the British stock market and events leading up to the infamous South Sea Bubble, the first major stock market collapse.

“This was the moment when stock speculation and investing in government issues moved out of the realm of the obscure and arcane business ventures that only a few people knew about, to become part of popular culture,” Liss told me during a recent visit to Toronto.

David Liss, A Spectacle of Corruption and A Conspiracy of Paper (Random House)

A Spectacle of Corruption takes place a few years after the South Sea Bubble burst, when England was still immersed in recession and the financial scandal was still casting a deep shadow over a volatile electorate. It’s a politically uneasy time with the Whigs and Tories battling for supremacy and George I attempting to secure his hold on the throne. The times were politically tenuous, Liss said, and corruption was rampant.

“There were things like voter clubs, in which hundreds of people would offer their block of votes to the highest bidder,” said the American-born author, who lives in San Antonio.

In A Spectacle of Corruption, Weaver is convicted of a murder he did not commit, escapes from jail with the aid of some mysterious friends, and attempts to establish his innocence. That task proves difficult because the court system, moved by powerful unseen forces, is determined to find him guilty, no matter what evidence he presents in his defense.

“His first problem was — how do you solve a crime when there’s no evidence a crime has taken place? This was a time before inductive reasoning and circumstantial evidence were considered legally valid.”

Liss had been studying 18th-century English literature at New York’s Columbia University when he decided to write the first novel, whose great popularity all but insured his career as a novelist. (Between the two Benjamin Weaver novels, he wrote The Coffee Trader, another immensely popular historical novel set in 17th-century Amsterdam.)

He decided to make Benjamin Weaver Jewish, he said, because he was intrigued by Anglo-Jewish figures from that era.

“I had done a lot of research about Jews in 18th century England and knew a lot about that,” he said. “But I’m also very interested in various types of Jewish historical identities and historical periods.

“The 18th century is probably the first time in modern history where something like a Jewish secular identity is even remotely possible. The British were a pretty bigoted people, but the Jews had far more liberties in England than in any other European countries, and could integrate into mainstream British society in various ways.”

An innovator of the financial historical thriller, Liss has done a thorough study of the English literary fascination with money and the connection often drawn between money and the Jews in early novels.

“The ways in which Jewish characters manifest in 18th-century novels offer a kind of personification of the changing role of money in consciousness,” he said, adding that, as fictional characters, Jewish money handlers were often presented in a malevolent light