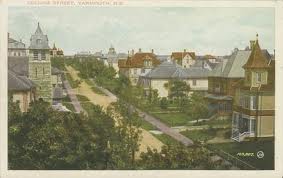 A melancholic mist o’erhangs the main street of Yarmouth, an isolated village of about 7,000 people on Nova Scotia’s extreme southwestern shore.

Sixty miles from the coast of Maine, Yarmouth has not changed much since its glory days as a thriving regional seaport in the late 19th century, when it served as a major embarkation point for goods and passengers bound for the United States and Europe.

Whether by accident or design, the town retains the salty atmosphere and exotic charm of its colourful past. Take away the cars and the pavement, and horses and buggies would not seem out of place here. Masts still clutter the skyline behind the buildings, and the Yarmouth Lighthouse, on a lonely promontory, still illumines a nocturnal path for sailors through a dark sea.

Although an attractive modern town hall is rising on Main Street, that avenue is otherwise a scenic promenade of old-fashioned storefronts and historic buildings, with horse-troughs and streetlights that look like the gas-burning variety of a century ago. Yarmouth also boasts two excellent museums, one devoted to local history, the other to firefighters.

Reverberating through the town, a ship’s horn announces the departure of the car ferry to Bar Harbour, Maine. That and a second regular ferry to Portland, Maine, bring commercial life to the town and keep the main street busy. Operating as reliably as the tides, the ferries bring visitors from Maine, Boston and other spots along the U.S. northeastern seaboard. Their welcome bounty of tourist dollars is much appreciated in a region plagued by high unemployment.

Unlike the textile and other industries, fishing, especially lobster fishing, is still a lucrative business in these parts. Many large homes by the shore belong to fishermen and are distinguished by satellite dishes in their backyards.

With a project to restore the waterfront in the works, Yarmouth seems in the process of revitalizing itself. Unfortunately, that’s more than can be said for the town’s Jewish community. Only five or six Jewish households remain of the 50 or so that could be counted in the vicinity half a century ago.

On Main Street, a clothing shop in a handsome old building bears the name LOUIS SHAPIRO in large white letters. Its proprietor is Richard Shapiro, a bespectacled gentleman in pinstripes whose grandfather established the firm in 1908. “My grandfather came to Nova Scotia about 1900, and he started out with a pack on his back. He went peddling all around the countryside; that’s how he started his livelihood. Then he came up in the world: he got himself a horse and buggy, and eventually worked his way up to getting his own store. The business has been going ever since.”

“Lonely” is how Shapiro describes the experience of being a small-town Jew. “I doubt there’ll be a Jewish community here in five years,” he says. “The Jews here, most of them are quite old, and they’ll pass on. The Jewish cemetery is almost all filled up.” ♦