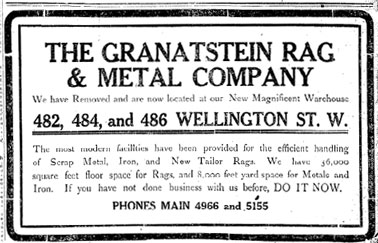 The following article, which appeared in the Toronto Star of December 8, 1906, highlights the fact that Toronto Jews did indeed get involved in municipal politics, even in the relatively early period of their citizenship in our free and democratic Canada.  In an interview with the Star, aldermanic candidate J. S. Granatstein presented his views on the importance of voting for merit, not race or creed; and contended that the city should own the  transit system and increase the number of playgrounds and parks. Despite his appealing platform, he did not win the election.

Platform of a Candidate for Alderman in Ward Three

Mr. J. S. Granatstein, who is a candidate for aldermanic honors in Ward 3, was interviewed by a Star representative this morning. He was asked whether, he had the solid support of Jewish voters in Ward 3 and whether he was put up as a candidate by the Hebrew Citizens’ League.

“No,” said Mr. Granatstein, “I do not believe it is right for the members of any creed to unite and put up one of their men and give him their united vote. I think there is an absurdity to use such discrimination against any other candidate.”

He further stated that he was of the opinion that there were some Jewish voters who were in favour of candidates not necessarily of their own nationality, but Mr. Granatstein believed that he would obtain many Gentile voters.

Mr. Granatstein thinks that the municipality should own the public utilities. He thought the street railway strike in Hamilton would not have occurred if the railway had been owned by the city. Municipal ownership was beneficial to the public, especially the labouring class. He does not approve of the suggestion of a certain alderman to hire vans to take the children to the country, and thinks that there should be a playground centrally located. He called attention to the absurdity of a young baseball enthusiast going to the City Hall to ask for a van to take him out to the country to play.

Mr. Granatstein, therefore, believes in having a playground. He further recommends that the benches be restored on University Avenue for the accommodation of citizens and visitors who have to walk to the outskirts for a seat in the parks.

Mr. Granatstein thinks that the city authorities, from alderman to mayor, should make it their business to see that all money spent should be spent well. For every dollar there should be 100 cents worth of good for the city. All expenditures should be right in the first place and save investigations, which waste money. ♦