The course of true love never did run smooth, as the Bard said, a sentiment confirmed by these two articles from Toronto newspapers in the pre-WWI era. The first story below appeared in The Globe of December 25, 1907:

Bells Did Not Ring

Free Fight in Synagogue instead of Wedding

Detectives and Policemen Had to Enter the Place of Worship and Separate the Combatants — A Romance of the Jewish Colony.

About 6:50 o’clock last night the police had to take a hand in the climax of a Jewish marriage engagement which has been the topic of conversation in the ward for some months.

A year and a half ago Rabbi M. Dickman, who is connected with the Chestnut Street Synagogue and the author of several well known books, came out to Canada and with his son and two other members of the family took up his residence at 122 Edward Street. He became acquainted with Mr. Neusbaum, who lives with his son Samuel and family at 28 Agnes Street and as the friendship became more intimate proposed that the families should be more closely united by a marriage between his daughter Sadie, who was then in Austria, and Neusbaum’s son, Samuel, who he understood was possessed of some property.

Everything went smoothly until Miss Sadie came to Canada with the rest of the family from Austria some nine months ago. To aid her father in carrying out his bond of agreement with Mr. Neusbaum, Miss Sadie was willing to forego some objections she had to it, and the engagement was announced about six months ago.

But the situation instead of getting better grew rapidly worse. Samuel, the bride’s brother said, only once took his betrothed out for the evening, and then it was a ten cent show, the admission to which the lover made some scruples about paying. The engagement was broken more than once, but renewed at the entreaty of Nuesbaum, who gave hopes of a considerable dowry and personal reformation.

Finally the day for the wedding was fixed for yesterday at 7 o’clock at the Chestnut Street Synagogue. The groom took out two licenses, one a few days ago and the other on Sunday, and prepared the marriage feast and bade the guests. But Sadie and her relatives were now determined that the marriage should not take place. Samuel Neusbaum did not behave as a groom should. He only had one suit for the occasion and that had been made for him by the bride and was his every-day one.

And, they said, he had made no proper provision for the bride. He promised to rent and furnish two rooms for himself and Miss Dickman, but all he did was to buy a few articles of furniture and take them to 122 Edward Street, where his intention was apparently to live with the other nine members of the bride’s family. He did not even get a ring, said the bride’s brother. In consequence of these and other objections the Dickman family refused to go any further in the matter.

Last night to a Globe representative the bride’s brother declared that the would-be groom came over in a rage and declared “your money or your life,” and stated that the matter must and should go on. Rabbi Dickman suggested that three fair-minded men should be appointed as arbitrators and that their decision should be binding on both parties.

Later last night the Rabbi was summoned by a message from Neusbaum to Chestnut Street. Synagogue where Rabbi Levi and some of his friends wished to discuss the matter. But when Mr. Dickman was once in the synagogue Neusbaum and his friends would not let him out without a promise to proceed with the marriage. His son called up the police and went down himself with a few friends to the synagogue, where a free-for-all fight was in progress when detectives McKinney, Montgomery and P. C. Prossen arrived and separated the combatants.

At 28 Agnes Street the Neusbaums were sitting at what had been intended to be the wedding feast. They were reticent about the night’s happenings and were hopeful of a wedding yet. Still they admitted there would be no wedding bells for some little time at any rate. ♦

Cupid was evidently thwarted in this case, as no record for a marriage could be found; but things turned out differently in the case below, from a story in The Globe of July 26, 1913:

Wed by a Rabbi at the City Hall

The great big object yesterday in the minds of two of Toronto’s Jewish population was marriage, but where the big event was to take place was a minor consideration. The ceremony making them man and wife was conducted right in the office of the Morality Department at the City Hall. It was an unusual sight for this room, which is maintained for the guidance of the morals of the city. Moreover, this wedding was a very rapid affair.

Jonas Mudrick, the man, had been advised to marry the girl, Bessie Brown, who had made a complaint against him. Upon being urged a little Mudrick was struck with the idea and deemed it reasonable. Bessie was happy in her consent and was really the big argument in Mudrick’s eyes that he should become a benedict.

Her dark eyes flashed when Mudrick had given his answer “yes”, which is just the reverse of the usual custom. Someone suggested that an adjournment be made to the Rabbi’s, but Mudrick scanned the furniture in the office and the big police officials and concluded that it was a “dandy” place for a wedding and steadfastly refused to go to the Rabbi’s. So Rabbi Levi came to the City Hall and the license giving Mudrick the privilege of marrying Bessie if he wanted to was produced.

Mudrick then led the blushing bride to the altar, Inspector Gregory’s desk, and Rabbi Levi went through the impressive ceremony of making the twain husband and wife. Judge Cohen was present, a police matron and several big constables, and in the midst of these minions of the law Jonas Mudrick took unto himself a wife. After the ceremony the two left arm in arm to go into the world and “live happy ever afterwards.” ♦ 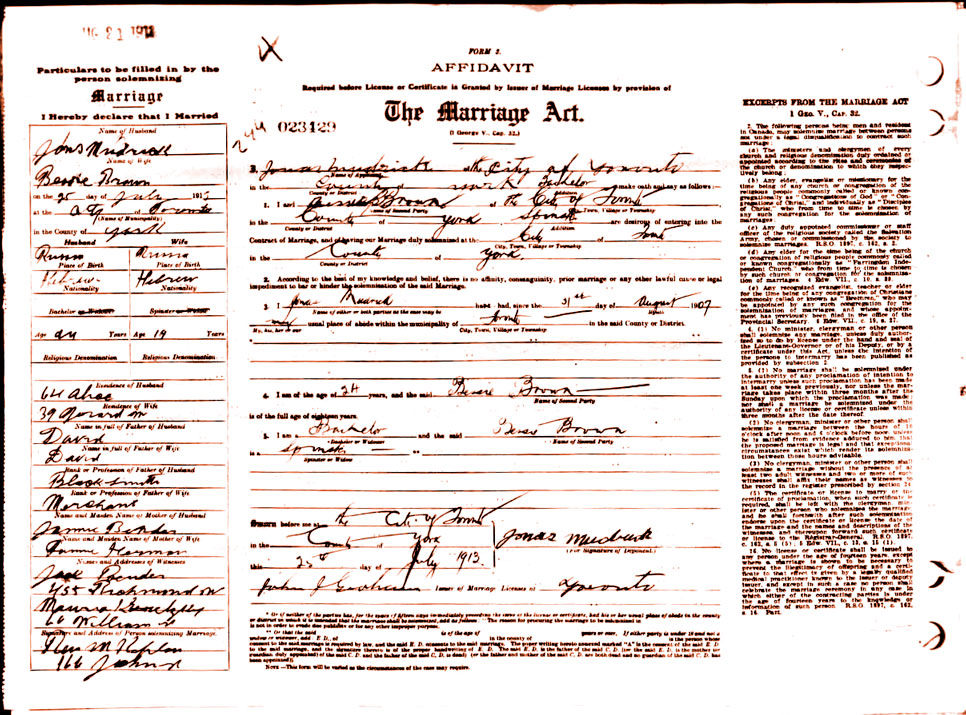