My Father Is A Book: A Memoir of Bernard Malamud, by Janna Malamud Smith (Counterpoint Berkeley) 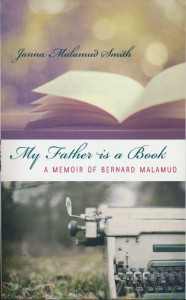 One hundred years after his birth in 1914, acclaimed novelist and short-story writer Bernard Malamud has been surprisingly overlooked by biographers — in large part because his family had blocked access to his private papers. But in recent years the family has repented of this action and is cooperating with British literary scholar Philip Davis who has a major biography of Malamud (an expansion of an earlier work) in progress.

Malamud, who died in 1986, wrote a handful of acclaimed novels, including The Natural, The Fixer and The Assistant, as well as hordes of fabulous short stories. The Pulitzer-Prize-winning author’s name often appears alongside the names Philip Roth and Saul Bellow, but his reputation may have slipped somewhat due to the lack of scholarly attention. Or so muses his daughter, Janna Malamud Smith, in the preface to My Father Is A Book.

Malamud-Smith now uses all available material at her disposal to present the sort of memoir that she once vowed she would never write. The book is very much a daughter’s recollection, not the empirical study that we expect eventually from Davis.

The son of immigrant shopkeepers in Brooklyn, Bernard Malamud’s formative years occurred before his daughter was born, after which the family moved to a town in Oregon. Despite the limitations of her perspective, Malamud-Smith succeeds in painting a three-dimensional portrait of a passionate and complex human being immersed in his literary art.

If you’ve enjoyed some of Malamud’s novels and short stories and want to know more about the man, this intimate, if overlong, memoir should satisfy. ♦