A WONDER WOMAN AT MASSEY HALL

Helen Keller Spoke to Large Audience Who Were Spellbound. 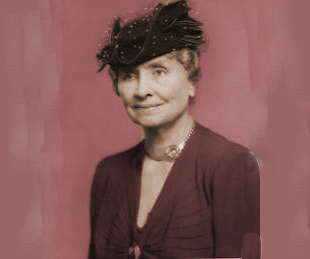 From the Toronto Star Weekly, January 1914

A magnificent audience almost filled Massey Hall last night, attracted by the appearance of Helen Keller and her almost as famous teacher, Mrs. Macey, who as Miss Sullivan, 26 years ago, took charge of the six-year-old blind deaf mute and gave her the means of communication with her fellow creatures.

Mrs. Macey was introduced by Dr. Hughes, who recalled Laura Bridgman, the first blind deaf mute to be taught. It was on reading about Laura in Charles Dickens’ “American Notes,” that Mrs. Keller obtained her first hope that her little girl might be educated. She went to the Institute in Boston and found there Miss Sullivan, who had been affected by blindness and had been associated with Laura Bridgman for six years, and who at the time was about 18 years of age, and the only available teacher.

Nothing could be more thrillingly pathetic than Mrs. Macey’s account of how she gradually made Helen understand the connection between symbols and things. Doll and cake were first words that she learned.

The first day she began to realize what words meant was after learning eighteen nouns and three verbs. She had confused mug, milk and drink together because they all meant the same thing.

But having a bath one day she asked, “What is all this?” with a gesture indicating the water. They went into the pump house afterwards, and as she held the mug with one hand and the water splashed over, on the other hand was spelled out the word water.

She dropped the mug, threw back her head and spelled water several times. Then she dropped on her knees, pointed to the ground and asked what it was; then to the pump, then to the nurse and baby who had just come in, and finally to Miss Sullivan.

“I told her I was teacher, and teacher I have been ever since.” (Applause.) 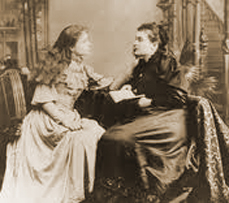 All that day she was greatly excited and began to realize that everything had a name, that she had a way to everything she wanted, her prison door was open, and that night for the first time she embraced and kissed her teacher.

She was fond of Greek mythology as a child and as resourceful in games as Ulysses himself, while in every way she was a healthy, happy child. On the Alabama farm she was in contact with the living creatures and obtained a sense of kinship with the world in which she lived.

Mrs. Macey expressed her conviction which she had gained, as a result of her experience that it was the child’s prerogative to lead the teacher. It was a waste of energy to try to make him learn when the child wanted to play. It was not the easiest way for the teacher, but it was the pleasantest and most profitable for the child. All our education was self-education.

Mrs. Macey related how Helen learned to speak, how she studied and took her degree of B. A. at Radcliffe College, affiliated with Harvard, and acknowledged that in many respects the pupil had outstripped the teacher.

“She has no eyes, but she sees deep into the structure of society. She has no ears, but she preaches a great change coming into the world. Out of the darkness she comes to you who dwell in the light with a message of Brotherhood,” Mrs. Macey concluded amid great applause.

Miss Keller then came on the platform and spoke. Her voice is not greatly different from that of some foreigners who are just learning English. She emphasizes the vowels more than the consonants, and some of her tones are full and musical, and if monotonous, her voice is not disagreeable. Her diction is idiomatic and fluent.

Her message, she said, was simple and plain. We all were gathered together and lived by and for each other. All success in life depended on mutual help. We should make the most of what abilities God had bestowed upon us, and should use them more fully and our minds more alertly.

“I was blind: now I see. I was dumb: now I speak. By the hand of others I found my father and mother, my soul, and love and God. But for my teacher I should be nothing,” elicited loud applause. “My life has taught me to put my trust in the Lord, and He shall uphold me and I shall dwell in safety,” she added. It was impossible for the blind man to see the splendor of the sunset.

“People with eyes look up to the stars without emotion. I do not see the wonderful fires In the sky. But they shine in my thoughts forever. Blindness has its wonders, too. Imagination breaks down all the barriers. Put thoughts into your senses. You will wonder at the beauty and the power that came to you. Your eyes and ears will be full of miracles. Look for them and you will find them,” she concluded.

Many questions were asked by the audience, which she answered promptly. She heard the applause with her feet, she said, arousing laughter and more applause. She spoke French after a fashion.

Phillips Brooks had taught her the love of God. Her favorite poets were Keats, Shelley and Walt Whitman. She liked Whitman “because he is so full of the spirit of the new democracy to come.” She loved to read Oliver Wendell Holmes. She imagined the colors. White seemed to be the soul of all things. She did not think socialism would come very soon. “You must work long and hard to bring it to pass.” She read Wm. Morris, Bernard Shaw, Arnold Bennett and Carl Marx. She had not read Henry George, but thought single tax a step in the right direction. She had a keen sense of music and its rhythm. She could feel the deep tones of the organ and its rise and fall like the waves of the sea. To the blind she said:

“I greet you all, my comrades in the dark.” The rain, she said, had spoiled her visit to Toronto. “I have not seen the city, but I love the people.”

Miss Keller and Mrs. Macey leave for London this morning. ♦