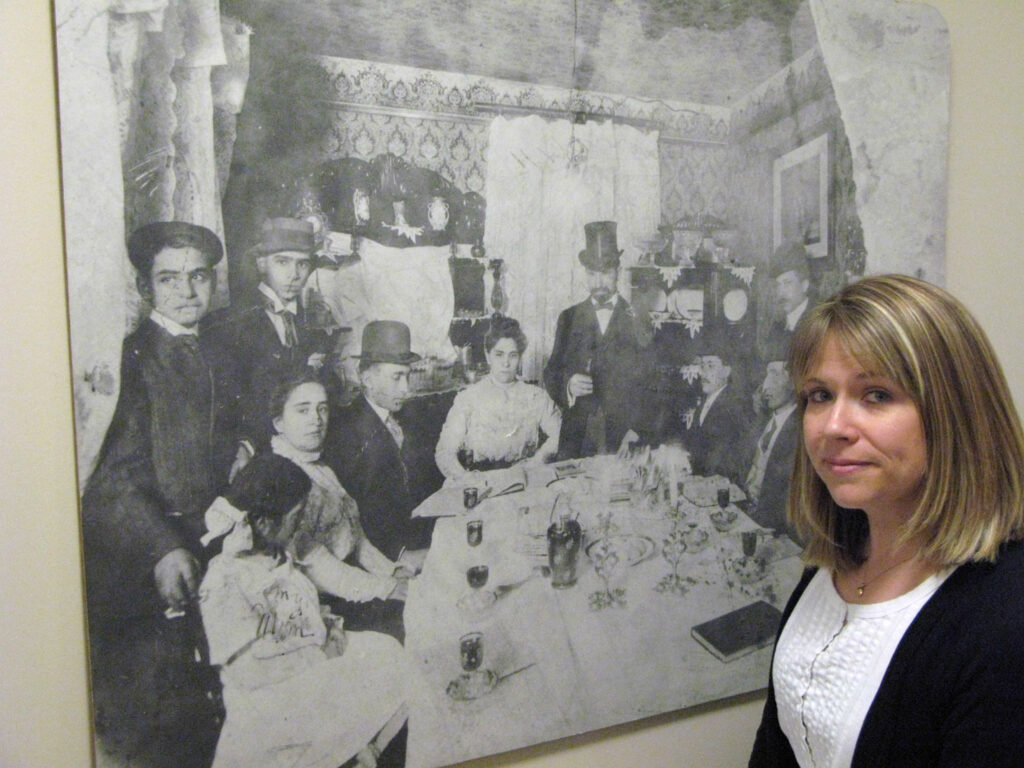 Above: Current OJA executive director Dara Solomon stands beside image of early Passover seder, the sort of historic photo the OJA has become adept at collecting and preserving.

◊ Note: In this article Dr. Speisman, the founding director of the Ontario Jewish Archives, describes its holdings, policies and activities as they existed in 1990. The OJA’s collections have expanded enormously since those times, and the Jewish community has also changed enormously, but it’s useful to record the OJA’s early history. 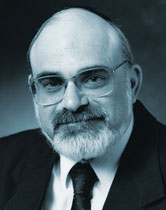 When Holy Blossom Congregation vacated its building on Richmond Street in Torontoin the late 1890s, its members left, in the basement strong-room, the records of the synagogue dating to its founding in 1856. About 1910, after several years of lying vacant and some years of being leased as a factory, the edifice was demolished, the basement was filled with the resulting rubble, and a theatre was erected on the site.

In the early 1950s, when the theatre was being replaced by a gasoline station and the property was excavated for the placement of storage tanks, the strong-room was discovered, broken open, and the minutes, which fortunately were in English, were returned to the congregation.

Other organizations were no more careful. The Jewish community of Timmins, for example, buried its earlier records when there was no longer room in the synagogue to house them; no one remembers the location. Secretaries of synagogues and mutual benefit societies frequently served for many decades because nobody else wanted the job. Consequently the records came to be regarded as personal property and were kept at home. Frequently, a secretary died in office, leaving children, unable to read Yiddish or insensitive to the historical importance of the materials, to discard them.

Personal papers fared little better. Population movement within cities or from smaller centres to larger ones over the past forty years promoted the destruction of files which could not be accommodated in suburban bungalows or apartments. Such was the measure of care taken of Jewish records in Ontario until about fifteen years ago.

Canadian Jewish Congress, founded in 1919 as the national representative body of Canadian Jewry, came to deal with a variety of matters of concern to the Jewish community: immigration; discrimination; relations with government; education and culture; overseas and wartime relief. It operates through a national office located in Montreal and through regional divisions: Atlantic; Quebec; Ontario (formerly “Central”); Manitoba; Saskatchewan; Alberta (formerly “Western”); Pacific; and, more recently, National Capital. In the larger Canadian cities, local Jewish communities set up apparatus for the central collection and distribution offunds for charitable purposes.

Neither collected systematically, sometimes not at all, and there was no central repository. This writer became involved in the Toronto Jewish Historical Society in the late 1960s at the behest of Dr. David Eisen, amateur historian and volunteer archivist of Holy Blossom Temple. Intending to write a history of Toronto Jews, I discovered to my chagrin that there was no readily available body of material from which to work. And when, in the course of my research, private individuals whom I visited offered photographs and minute books, I had to decline because there was no place to put them.

I protested vociferously to the society. In this period, Victor Sefton was both president of the Toronto Jewish Historical Society and a member of the regional executive ofCanadian Jewish Congress. It was Sefton who orchestrated a merger of the two archives committees, representing recognition of the fact that preservation of the historical record is a communal responsibility.

Established in 1973, the Canadian Jewish Congress Central Region Archives had first a part-time and later a fUll-time archivist – myself. The entire operation consisted of two used file cabinets housed in a basement room at Shaarei Shomayim Synagogue in Toronto, space used also as a dressing-room for the congregation’s female catering staff.

I soon learned to knock tactfully before entering my office. The following year, a regularbudget was allocated and a small room was found for the archives in the century-oldJewish community building on Beverley Street. Eventually, we acquired most of the second floor, partly with official consent and partly, as our collection grew, by “squatters’ rights.” No one wanted to move all those boxes!

With the establishment of Toronto Jewish Congress, the archives came principally under its aegis, but continues to act for Canadian Jewish Congress in the rest of the province. The lay committee, which serves as a policy-making and hands-on volunteerbody, continues to be a province-wide one. It is divided into several working subcommittees: steering; acquisitions; cataloguing; oral history; and exhibits.

The close relationship with Toronto Jewish Congress proved a fortunate one for the archives.When the community built its new headquarters on Bathurst Street in North York in 1983, we were permitted to design space specifically for archives use. Our present facilityconsists of a storage vault equipped with Halon gas and environmental controls, reading room, workroom/laboratory, and offices.

From the outset, the collection was intended to encompass, not merely the records of our sponsoring organizations, but all aspects of Jewish life in Ontario. Consequently, although the records of synagogues and other Jewish religious institutions comprise a major portion of our holdings, our mandate extends also to mutual benefit and welfare organizations, schools, cultural institutions, and private individuals. The collection consists of organizational minutes, correspondence and financial records, architectural drawings and blueprints, ephemera, and Jewish books and periodicals published in Ontario or about Ontario Jewry.

Selected artifacts are also collected, these ranging from society badges and costumes, cornerstones of demolished synagogues, charity boxes, and candelabra, to bottles produced by Jewish soft drink manufacturers and dairies. We have even been known to take in items of furniture from defunct congregations, although every effort is made to find good homes for them elsewhere.

Papers which document non-institutional Jewish life in this province also fall within our purview.These include, for instance, immigration papers, deeds, correspondence, memoirs, and diaries. The latter are especially rare for Ontario since Jews were usually not wealthy and had insufficient leisure to keep them. The archives attempts to supplement both the institutional and private papers with oral histories of elderly individuals and those who have been active in various aspects of community life.

In addition to continuing to expand both our institutional and private holdings, we plan to initiate a programme of computerization which will make our collections more easily accessible. Our hope also is to engage additional staff to enhance our service to the public. ♦