From the Canadian Jewish News, January 2016 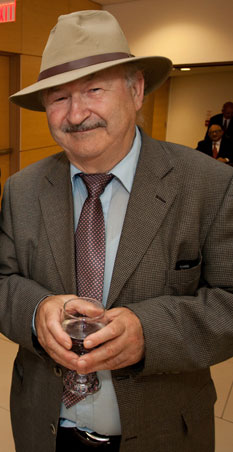 Born in Radom, Poland in 1939, Adam Gabriel Fuerstenberg survived the war as a child by escaping with his mother to Galicia, then Soviet Asia, while most of their extended family were murdered by the Nazis. Residing after the war in a Displaced Persons Camp in Stuttgart, Germany, the small, malnourished child used to demonstrate his love of reading by walking across town to a small lending library in the American zone.

“One day Eleanor Roosevelt came to look at the American library, and the librarian trotted out this solitary little guy — Adam — to show her how the library was being used by the local children,” said Gloria Fuerstenberg about her late husband, who died in Toronto on January 3, 2016, at the age of 76.

Fuerstenberg, who knew four or five languages including a fluent Yiddish, went on to become an esteemed professor of English literature at Ryerson University. A passionate teacher, he was the founder of the community’s 27-year-old Canadian Jewish Book Awards and a long-serving editor of Parchment, the journal of Canadian Jewish literature. Books and literature were as central in his life as the many students, writers, teachers and others whom he encouraged and inspired.

“He was a person who understood darkness and was an expert in every detail of the darkness of the Holocaust,” said Rabbi Yirmiya Milevsky in a eulogy. “And yet he brought a tremendous amount of light into the world.”

“He was my colossus,” said his younger sister Anna, who was born in the DP camp in Stuttgart. “He was my comrade in arms, always ready to defend and protect. We were, in his words, the ‘last of the Mohicans.’”

Arriving with his parents in Montreal in 1951, Fuerstenberg went to fabled Baron Byng High School while his father worked as a carpenter. When his father put some money down from his first pay cheque on an encyclopedia, the barely teenaged Fuerstenberg started reading the multi-volumed set all the way through from front to back.

He went to Sir George Williams University and studied English lit as a graduate student at the State University of New York in Buffalo. Soon after marrying the former Gloria Lidsky in Montreal in 1964, the couple moved to Toronto. One day, on a whim, Fuerstenberg dropped by the English department of Ryerson Polytechnic Institute and asked for a job. He was hired and remained on faculty for 41 years, also becoming a long-serving member on the Ryerson board of governors.

For a while Fuerstenberg headed the community’s Committee for Yiddish and was the first literary critic to write appreciations of Canadian Yiddish writers. “He was the pioneer scholar who wrote about Canadian-Jewish writing, both Yiddish and English,” said his friend, Seymour Mayne, a professor of English at the University of Ottawa. “He was the first to take it seriously and many others followed.”

Fuerstenberg headed the Holocaust Education Centre in Toronto for a time and helped to bring important exhibits to Toronto, including one on Anne Frank; several years ago, he escorted a group of teachers on a Holocaust Mission to Europe. He was an enthusiastic champion of numerous projects, including a Toronto Jewish Museum project about a decade ago.

“He felt passionately that there should be a Jewish Museum” in Toronto’s former ROM Planetarium, said his son, Zack. “He was probably in the early iterations of proposing the idea, but I believe the project is now in the process of being realized. Other people have obviously taken it forward.”

A widely published scholar, Fuerstenberg wrote occasional pieces in the Canadian Jewish News, the National Post and the New York (English) Forward, including a story two years ago on the “significant Jewish backstory” to the popular television series, Downton Abbey. He also wrote an appreciation on Jewish Writing in Canada for the website Historica Canada.

“He was the first to break ground connecting Yiddish literary culture in Canada to the work and writing life of the first generation of Jewish Canadian English-language writers, including A. M. Klein, Irving Layton and Mordecai Richler,” asserted the Association for Canadian Jewish Studies, which awarded him its Louis Rosenberg Distinguished Service Award in 2014. “One need only check any bibliography of Jewish and Yiddish Canadian writing to note his trailblazing distinguished contributions.”

“Boundless optimism, commitment to teaching, and utter devotion to family” were the three qualities that best defined his father, according to son Zack. Others cite his many enthusiasms and his eagerness to help others after having known suffering and deprivation in his early life.

Besides Gloria and sister Anna, he leaves children Glenda, Zack and Ariela and their spouses, and three grandchildren. ♦