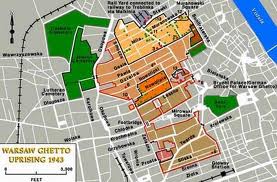 In the decades before the Holocaust, the Jews of Warsaw believed that they were on the eve of a great positive transformation, according to an Israeli professor of Jewish history who took part in the Warsaw Ghetto uprising.

The Jews of Warsaw were poor, often living in one-room flats where lively discussions of religion, politics and Zionism occurred nightly, Yisrael Guttman, a professor at the Hebrew University in Jerusalem, told an audience recently at Toronto’s York University.

Warsaw Jews “were expecting a great change and a new society built by human beings which would bring more equality, more human rights, more chances for a better future,” he said.

Speaking as part of a lecture series marking the 50th anniversary of the Warsaw Ghetto uprising, Gutman attributed the strength of the Jewish resistance in Warsaw to the powerful ideals of Jewish youth. “The idea that the Jews have to fight, that the resistance is a sacred duty, started within the youth movement,” he said.

Guttman refuted the conclusion reached by some scholars, including Hannah Arendt and Bruno Bettelheim, that the Jews reacted passively in the face of their total destruction.

“It’s not true that the Jews of Warsaw and Poland were passive or submissive. In fact, 80 percent of the food consumed in the Warsaw Ghetto was delivered by smuggling — by illegal action. Day by day, hundreds of people engaged in this undertaking,” he said.

“Seventy percent of the production in the Warsaw Ghetto was delivered to the Polish and Aryan side by illegal channels. Not only weren’t the Jews submissive, their entire life was in spite of and against the orders and regulations of the Nazi power.”

Guttman also discussed Menachem Ringelblum, one of the heroes of the Warsaw Ghetto. Years after his murder by the Gestapo, Ringelblum’s records and diaries of daily life in the ghetto were discovered buried in containers.

“From the first day of the war, Ringelblum felt that it was his obligation to create evidence and documentation of what was going on in the Warsaw Ghetto, and to bring these to the attention of the rest of the world,” Gutman said.

“His last work was a book about Polish-Jewish relations, written in hiding among Poles, without archives, without books, without any help whatsoever. He wrote a study which until today, in my opinion, is the best analysis of Jewish-Polish relations in the interbellum period and in the period of WWII.”

Guttman’s was the third of four talks presented as the annual Leonard Wolinsky Lectures. He was followed by University of Toronto professor Michael Marrus, who addressed the topic, Rethinking Jewish Resistance. ♦