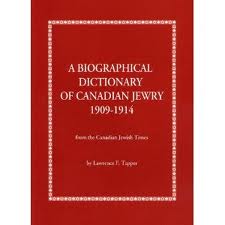 Between 1897 and 1914 — the period between the rise of Zionism and the start of the Great War — a quality English-language fortnightly newspaper captured the flavour of Jewish life in Canada.

Published in Montreal, The Canadian Jewish Times functioned as a community bulletin board for the several thousand Jews then resident in Canada who were conversant in English and well-integrated into the Canadian mainstream. It was of little use to the “green” Yiddish-speaking throngs that were still arriving daily (with no restrictions in the days before None Was Too Many) at Halifax, Quebec City, Montreal and other ports.

Now thousands of these classified advertisements have been indexed and bound into one volume. Entitled A Biographical Dictionary of Canadian Jewry, 1909-1914, From The Canadian Jewish Times, the book is the work of Lawrence F. Tapper, a 41-year-old Jewish archivist at the National Archives in Ottawa, who admits he completed the project as “a labour of love” rather than for any remunerative reward.

“If I’d written a genealogy of a springer spaniel, it probably would have sold more books,” he jokes.

According to Tapper, Canadian Jews as a whole have no overriding interest in their ancestry. “They’re somehow cabbage-patch people,” he says. “Their ancestors were somewhere out there and nobody knows how to find out because of all the wars and the great upheavals that have taken place in this century.

“And of course a lot of Jews who came to Canada in this century have cut their ties to their past, and they never told their children what they went through…. So for some reason the Jewish community hasn’t picked up on genealogy as an interest the way other communities have.”

Tapper, who was instrumental in acquiring and microfilming the Jewish Times for the National Archives about a decade ago, was quick to realize its worth as a source of information. The classified advertisements, especially, often give key details of family history. Death announcements, for example, generally provide dates and places of birth as well as names of surviving family members. The ads are now easily accessible between the covers of a single volume that offers much more information on Canadian Jews than has yet been assembled between two covers. 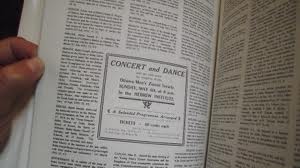 The Biographical Dictionary is divided into sections on Montreal, Toronto, Ottawa and other cities where there were significant Jewish populations. The book reflects the fact that in those days — and indeed until only several years ago — Montreal’s Jewish community surpassed Toronto’s in size and was the largest in Canada. Eighty-eight pages are devoted to Montreal versus only 24 for Toronto.

Tapper has already prepared a manuscript featuring the classifieds from the Jewish Times for the earlier period of 1897 to 1908. But according to Gary Mokotoff, head of Avotaynu Inc., the U.S.-based publishing house that produced the Biographical Dictionary, sales have to pick up considerably before its companion can be published.

“There is no shortage of books on Jewish history — we have more history books than you can shake a stick at,” Tapper comments. “They range from early Zionism to the Holocaust to the emergence of the State of Israel, and so on. But on Jewish genealogy? For some reason that interest hasn’t filtered down to the masses yet. We look on our history on a global perspective but not on the personal level, for some reason.”

Tapper himself has done extensive research into his own family tree. His ancestors came to Canada from the Kamenits-Podolsk, Poltova and Kiev regions of Ukraine in the 1890s. His grandfather, Leibel Tapper, was one of the original explorers of northern Manitoba and Lawrence, who grew up in Winnipeg, makes occasional treks to a 36-room fishing-lodge-style guest-house that the family still runs in Gillam, Man.

Tapper notes that no large communal organizations operated — or produced records of any interest — during the era of the Canadian Jewish Times. “This is really the only national resource that we have for that period,” he says.

The Biographical Dictionary of Canadian Jewry may be ordered directly from Avotaynu Inc., http://www.avotaynu.com/ ♦

Note: Tapper also compiled an earlier series of advertisements from the Canadian Jewish Times covering the years 1897 to 1908, which is now searchable on Ancestry.com