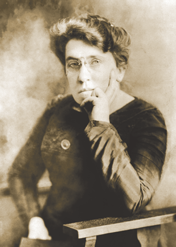 A recent book pays more attention to Goldman’s three periods of residence in Toronto (1926 to 1928, 1933 to 1935, and 1939 to her death in 1940). The World’s Most Dangerous Woman: A New Biography of Emma Goldman, by Theresa Moritz and Albert Moritz (Subway Books, 2001) accounts for her Toronto years in such generous detail that it provides an important chapter of our history, particularly as it relates to the labour movement.

The Moritzes contend that “Red Emma”, as the Americans dubbed her, was the world’s most dangerous woman because she could adapt her brand of anti-establishmentarianism and anarchy to practically any place she happened to be. She was a radical, plain and simple, on whatever soil she found herself, including Canada’s.

The authors bring to light many new private sources in Europe and the United States, and so present what is virtually a fresh interpretation of Goldman’s life. The Moritzes live in Toronto and are the previous authors of a biography of Stephen Leacock and The Oxford Literary Guide to Canada. ♦

Deported from the United States in 1919 after serving a two-year prison sentence for “conspiracy against the draft” during WWI, “Red” Emma Goldman spent two years in Russia, during which she met Lenin and encountered a Bolshevik society that she recognized as being more politically oppressive than anything she had experienced in America.

After a few years in Europe, the legendary anarchist and feminist moved to Toronto in 1926 to be close to the nation from which she had been exiled. She lived in various residences on Spadina Ave. for several years in the 1920s and the 1930s, remaining always a committed activist and the center of a lively circle of supporters.

Several years ago Toronto filmmaker Coleman Romalis discovered that Goldman had been living in 1940 with friends in a house on Vaughan Rd., around the corner from where he lives. It was in that house that she suffered the first of two strokes that would silence her forever. The discovery was the impetus for him to make Emma Goldman: the Anarchist Guest, an engrossing 42-minute 42-minute documentary.

This well-researched film spotlights Goldman’s Toronto years with intriguing interviews with people who knew her. Invariably they describe her as a “strong little woman” with a “commanding” presence and an “imperious” (or “bossy”) manner.

Goldman respected Toronto’s civility but was continuously irked by our small-minded conservatism. She longed to return to the United States, but was admitted only once, for a 90-day lecture tour in 1934, on the condition that she avoid the subject of politics. Fortunately she was also a free-love advocate who could speak rousingly about birth control. (She would have done so more often in Canada but for fear of violating our modest “blasphemy” laws.)

Goldman evidently practised what she preached, for she had no children despite a string of lovers. The film describes her as being addicted to young men, and her frank autobiographical descriptions of her amorous exploits proved shocking to many. Her life’s grand passion was Dr. Ben Reitman, a womanizing Chicago medic with whom she had a relationship for many years.

Kudos to Romalis for making this overdue profile of a hot-blooded American political creature forced by circumstance, like a bird whose wings have been clipped, into our droll provincial precincts. Her exile from America ended only with her return in a casket: she was buried in Chicago. ♦