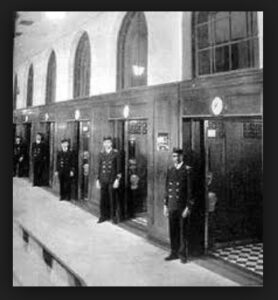 David Harum, who said, when striving with his rich friend, that many a wealthy man would duck his head instinctively at the cry, “beware bridge,” knew what he was talking about, for nearly every one of us at some period of his life has had a time when he had to stoop low, because the stress of circumstances would not permit him to hold his head high.

Nearly every life, with the exception of those placid little lives which one happens across now and again, generally in out of the of way country villages or in sleepy old cathedral towns in the Old Country, has some ups and downs, some light and shade. But the life par excellence of ups and downs is the life of the elevator man in any of the big buildings or stores in Toronto and elsewhere. He is continually going up or down, and, unlike the majority of men, he takes a large number of persons, who may be utter strangers to himself, up or down with him. 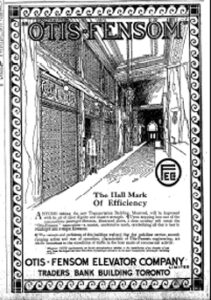 A queer life, certainly, but an interesting one, must be that of the elevator man. If he be at all given to noticing his carloads of people, he will find much to interest and amuse him. One need only watch the crowds who dally ascend and descend the elevators at Simpson’s or Eaton’s for a quarter of an hour at various times of the day to realize the truth of this. The people who use the elevators during the day may almost be classified and divided into sections.

First, punctually at 8 a.m., the bargain-seeking crowd arrives. These people look upon the elevator as a useful means of getting at the much desired curtains, or boots, or whatever it may be that they are after, as quickly as possible. They come and go quickly and in a business-like manner and give little trouble.

At about 10 a.m. the average buyer begins to arrive. She—for it is nearly always a she, as the men are generally engaged in earning the money which she delights to spend—she isn’t nearly so certain of her object. In view as the bargain hunters were, and generally drifts somewhat aimlessly round the ground floor for a quarter of an hour and then bethinks herself of the elevator which she enters without knowing in the least which floor she wishes to go to, having only a vague idea that it is probably not the first floor. 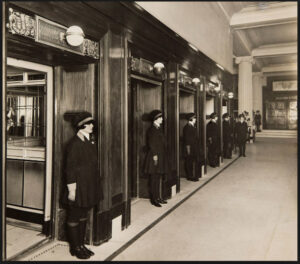 But her friend has an equally vague idea that she does want the first floor, so when the elevator stops, out she gets and then the trouble commences for the elevator man. The two ladies will stand and argue the question, one being in the car and the other on the floor, and after a few seconds’ heated discussion will first agree to go up to the lunch-room to have an ice cream, but finally decide to look at the curtains first. And the time of two trips has been lost to the elevator man. But then it is always a woman’s privilege to change her mind.

At twelve o’clock the people change again, for it is the dinner hour, and multitudes of employees in offices and elsewhere come into the big stores to make their purchases or to have lunch. For two hours the elevator is busy carrying up hungry passengers and bringing down satisfied ones. At Simpson’s particularly, it is amusing to see the difference of expression of those who are going up to the lunch room and of those who are coming down, having had lunch. Judging from the satisfied air of the descendants, the luncheons at Simpson’s are quite excellent.

From two till six a great number of people use the elevators, and with few exceptions use them sensibly, remembering that they themselves save time and trouble if they go about their shopping in a methodical way.

Children are nearly always highly delighted with the elevator. They like the sensation of going up and down, it being the next best thing to a switchback. Sometimes, however, they are frightened and set up a lusty howl, but this is a rare occurrence. The other day a little girl was going up to the lunchroom at Simpson’s with her mother. When the car stopped, she looked up and said, “do they keep the spare-room up there?” Evidently the spare-room at her home was in the attic.

Here, as elsewhere, the funny man perpetrates his little jokes, but they are seldom original. At Simpson’s the flowers and the lunch room are on the same floor, and it is a quite common occurrence for the funny man to say that he wants to go to the flower and food department. As the elevator man has heard this probably some dozens of times during the season, it fails to elicit more than a grim smile from him, but the joker chuckles all the way up to the top floor, and as it amuses him no harm is done.

Conversation with the elevator man is carried on under difficulties. The many interruptions caused by the entering and outgoing of so many people on so many floors is not conducive to anything more than a most fragmentary conversation. However, although the life of an elevator man largely consists of ups and downs, it is by no means an unhappy one. Oh, I find it a decent enough job,” he says, “and if at times some cranks come in, it only makes a little change. Up, up, going up!” ♦